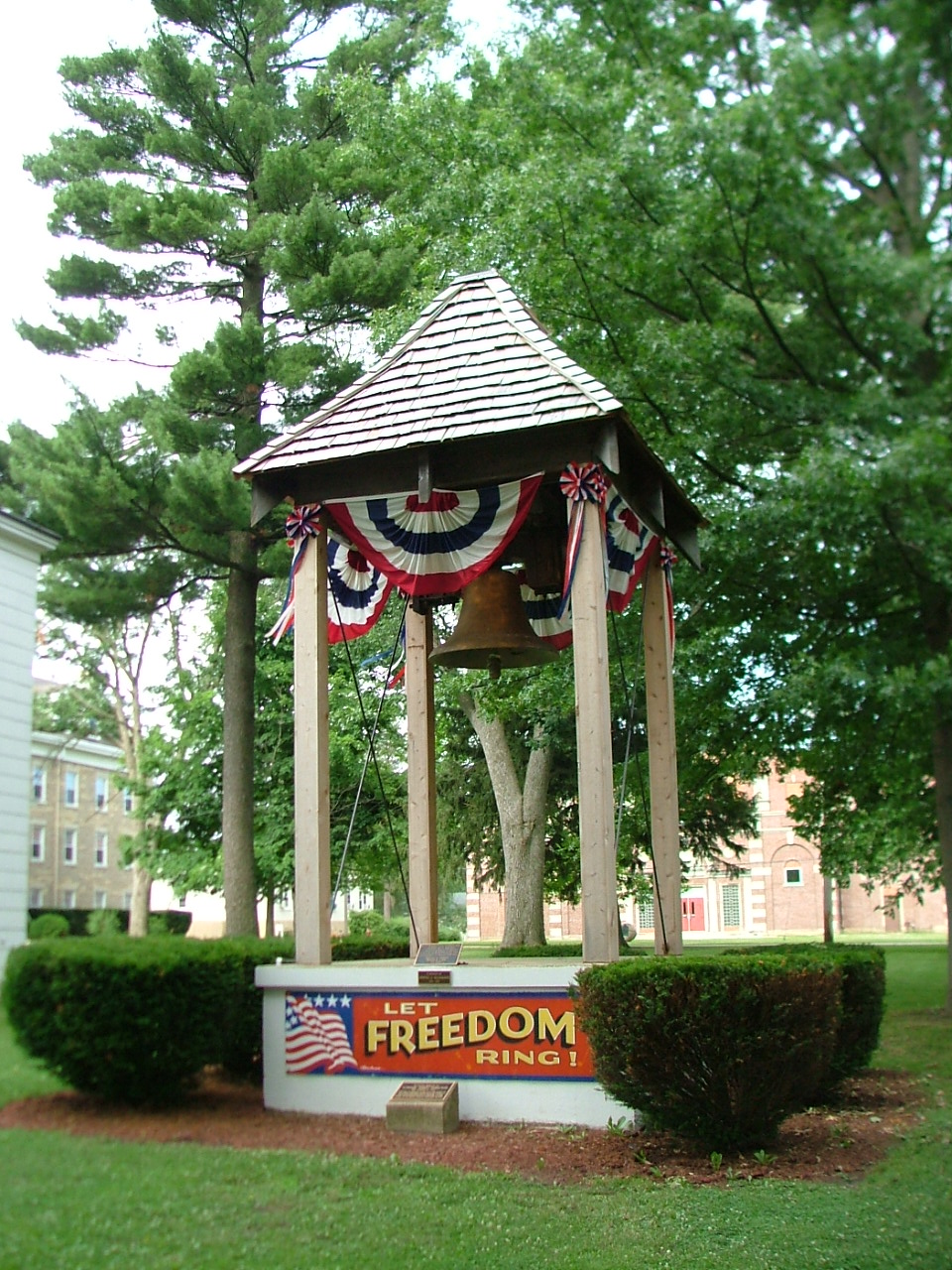 On July 4, 1776, 56 defiant men proclaimed the signing of the Declaration of Independence by tolling the Liberty Bell at 2 o’clock in the afternoon.  The adoption of this historic document marked the birth of our country as a free and independent nation.  The tradition of ringing bells on Independence Day, each bell tolling thirteen times, one toll for each of the original colonies, stemmed from this great event.  In 1963, Mt. Morris became the first town in the State of Illinois to reinstate the tradition of ringing bells on Independence Day.  In April of that year, Ronald Reagan (40th U.S. President) was in Mt. Morris to dedicate the first freedom bell, which now hangs at the Memorial Fountain.  Three years later, on July 4, 1966, the bell that hangs in the bell tower was in place. 1966 should be considered the year of the bells.  A great fever swept the country.  The two men who drove this movement were in Mt. Morris on July 4, 1966 when the Freedom Bell was dedicated.  In 1971, the Mt. Morris Freedom Bell was designated as the Official Freedom Bell of the State of Illinois.  Thousands gather annually in Mt. Morris over the Fourth of July Holiday.  For forty-three years the Freedom Bell in Mt. Morris has been rung in unison with other bells across the nation at 1 p.m. CDT, to celebrate our nation’s independence.  The Illinois Freedom Bell has a rich history.  It was cast in the U.S. in the early 1860’s as a replica of the Liberty Bell.  Its first location was in a belfry of an old church on the shores of Lake Geneva, WI.  A fire destroyed the church, but the bell was undamaged.  Church members decided to relocate the church on the opposite shore of Lake Geneva.  During winter, when the lake was frozen, a group of men attempted to drag the bell across the ice.  The weight of the bell cracked the ice, the bell sunk to the bottom of the lake and remained submerged for over forty years.  A wealthy resident of Lake Geneva located the bell, raised it, and planned to make it a focal point of the house he was building.  In 1966, an article, published about this bell, generated interest within the Mt. Morris Community.  A dozen members of the Mt. Morris July 4th Committee went to Wisconsin to investigate.  With the assistance of the Mt. Morris VFW, who loaned the July 4th Committee the money, and with donations from local residents, the bell was purchased for $500.  The bell weighs 1,500 pounds, and is 4 feet high and 4 feet wide.  The bell is silver in color and is cast from bell metal.